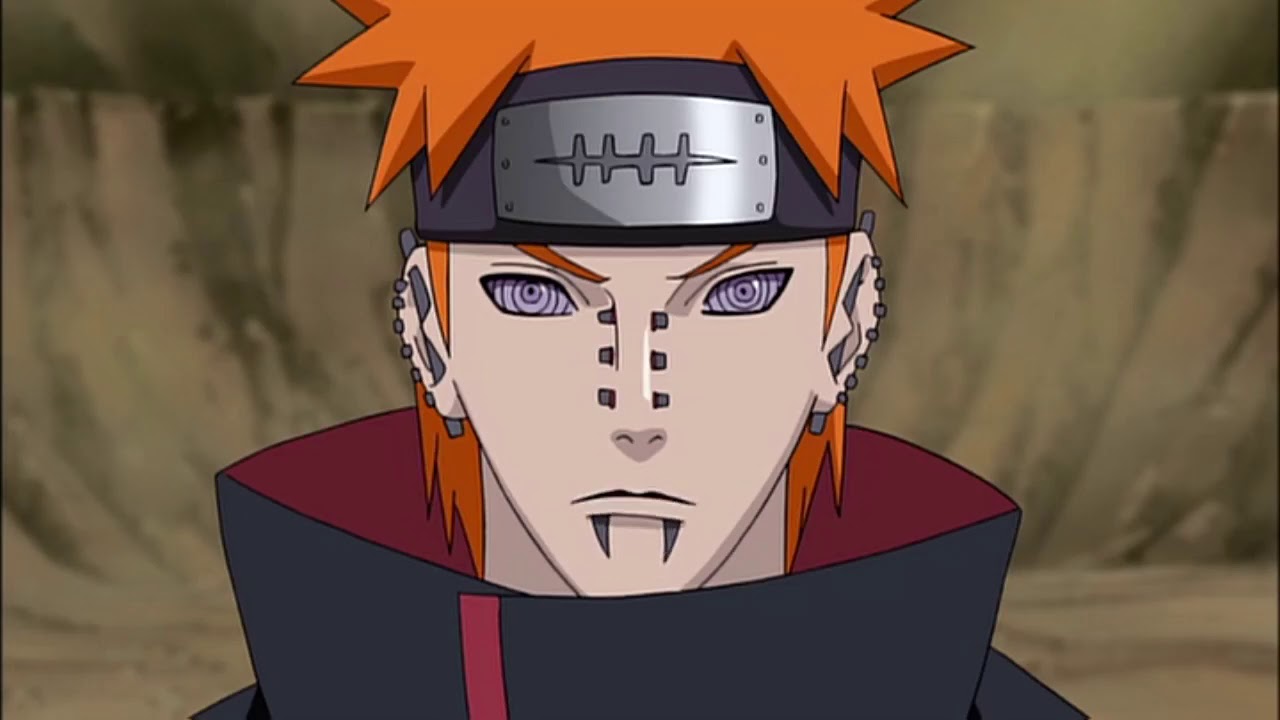 Let's pretend that instead of Jiraiya facing Pain in the Rain village, Naruto would've. Naruto is his Hokage self at this point.

He can only use his base form and Sage Mode. Remember how he was using his Rasenshuriken as his trump card against them?

Now he can make them, in one hand, throw them, and guide them, without Sage Mode. All in base mode.

Since Naruto can guide the Rasenshuriken now, when the first one is absorbed, Naruto would just direct it into the other Paths while avioding Preta Path or, what's more likely, take out Preta Path with taijutsu right away.

Keep in mind that i said that they have no intel on another. So Naruto doesn't know the 6 paths of pain secret and how the abilities work, but neither does Pain about Naruto's abilities.

But it's not like he won't be able to figure out their abilities, especially if Pain uses them And this Naruto is so much more powerful in both skill and mind than the Naruto who fought Pain as a teen.

I'm pretty sure that Naruto could just sent one or two shadow clones to deal with the undying Dog after he took out the rest of the summons.

And that would leave the Animal Path exposed. But as i said, Naruto is allowed to use summoning jutsu. It's just not necessary required considering that at this point his fire power is so great you'd say it's unending.

Vladosaurus wrote: As i said, as a teen, Naruto's shadow clones could manhandle Kurama himself. They can't hide from SM sensing That only happened to Jiraiya who never ever displayed the sensing ability in the fist place as far as i recall Naruto sensed the Animal Path in the dark when they were in Gamabunta's mouth.

It makes no sense for them to be able to hide from sensing. And honestly, you can't compare the multi head dog with Kurama The Toads were having trouble with him because the can multiply , but the toads are very large.

SM Shadow clones wouldn't get hit by the Dog in a million years As a teen, a SM shadow clone dodged the third Raiakge at full speed. As Hokage, a SM shadow clone would dance circles around the Dog Vladosaurus wrote: They can't hide from SM sensing Who single handedly roared at 6 Bijuu and pushed them all back at once.

Who used The 6 Tails Saiken as a baseball bath to beat the other Bijuu. He would have trouble against a freaking summon? Give me a break with these summons stuffs.

A summon as large as it would be will never ever even compare with a Bijuu. Part 1 Shukaku was completely trash compared to what a real bijuu from part 2 could do.

Dude, are you for real? Honestly, whats up with these arguments? And Naruto already proved the ability to sense the other paths so i really don't know what else you want.

Actually, was it ever stated that anyone except Karin could do that? And regardless, again, Naruto already sensed the Paths. So moot point.

Naruto sensing the Animal Path clearly contradicts your argument. And on top of that he also sensed Nagato out when he stabbed himself with the rod.

Again, clearly contradicting your argument. This is not Jiraiya or Ma or Pa we are talking about.

Ma for instance had to use her tongue to find and sense Pain's Chameleon. Just because they are sage creatures it doesn't mean their abilities are enhanced to the max or that their sensing works the same as it does for Naruto.

Naruto sensed Pain on 2 different occasions. Case closed. And that was when Naruto was only a beginner in Sage Mode.

Before Naruto entering the War Zone, he sensed the entire war going on while in Sage Mode, and he still was on the Turtle Island which was Gods knows how far away from the war.

If we go by your logic, than anybody who doesn't have amaterasu or i guess some strong sealing can't win against the dog, right? So for instance then Ten Tails wouldn't with against him, right?

The idea was that shadow clones would keep the dog busy while Naruto took out the animal Path. Regarding the other despute, first of all, you do realize that Pain being able to "hide his paths" from sensing is something you and only you made up, right?

Sorry, but don't you think that it's a little bit of a hypocrisy on your side to tell me to prove your made up little story right?

I don't have to prove you anything, despite the fact that i already proved you wrong, and you won't accept it. Nagato can't hide like Karin and Naruto already proved that And this is SM Naruto we are talking about.

Then why was the animal path so lost inside Gamabunta's mouth? He clearly had no idea what's going on. Nagato was able to sense even Kabuto when he was controlled as an EDO.

So there you go. I honestly don't even know why i bother to give you examples. You're simply not right. Stick to what's canon. This is my thread and i politely ask you to not bring made up arguments to the debates like some of you do with other threads.

Pain would beat Naruto. Naruto with Kyuubi could not beat an emaciated Nagato. The Dogs cannot be beaten without amaterasu.

Canon proves it. The dogs can only be trapped,sealed,killed by the flames of hell which is ironic because the Cerberus assumes its position as the guardian of hell as per Databooks.

The invisible bird cannot be sensed by KCM Naruto hostility sensing. Pain can go inside the invisible and appear near Naruto and grasp his lifeforce and pull it out.

Shinra Tensei is an extremely fast attack. Only Itachi dodged Shinra Tensei when former initiated it. In my opinion he destroys. Stating facts and not resorting to fabricating canon like you do is 'troll fun' now?

Okay then. I am blatantly stating what the manga showed. SM Naruto barely survived with Kyuubi. How the hell is his Adult version taking on something which his more buffed ass version could not?

Natrix Spiritual Cloak Gleam Only the fact that you said that Hokage Naruto is nothing more of a thread that a kitten proves that either a You have no idea what you're talking about or b You are a troll and this is just wasting my time.

Ok, let's start with the beginning. First of all, "the invisible bird" is a Chameleon, and Ma who is also using Toad Sage Mode already sensed it out when Jiraiya was fighting pain.

So if Ma could sense it, what makes you think that SM Naruto can't? Also Bansho Tenin and Shinra tensei can be countered with shadow clones, as Naruto A much weaker version of Naruto actually already proved.

You can't even dodge Bansho Tennin. Naruto also while he was in Sage Mode during the Pain fight as a teen couldn't use many Shadow Clones because it would disrupt the shadow clones who where absorbing NY.

Keep that in mind. Even if Naruto sends just one shadow clone for each Path of pain, the tables are severely turn.

Preta Path couldn't absorb Naruto's shadow clone when they fought, so that also fails for Pain. Sign In Don't have an account? Start a Wiki.

Synopsis Kakashi engages in combat against the Deva Path , attempting to strike it with his Lightning Cutter. 4 thoughts on “Pain Vs Naruto”